Home » Children's Corner » An Introduction to Maria Montessori for Children

An Introduction to Maria Montessori for Children

Posted by Winfield Staff on October 22, 2012 in Children's Corner | Comments Off on An Introduction to Maria Montessori for Children 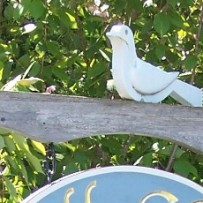 Our School Director, Michelle Vogel, tells this story to children at our Peace Pole Ceremony in October. Each year, we gather on United Nations Day to rededicate our Peace Poles at the Children’s House and the Toddler House.

A long, long, long time ago, before your parents were born and even before your grandparents were born, a little girl was born in a small town in Italy. Her name was Maria Montessori. When Maria was a little girl, she enjoyed going to school and knew at a very young age that she wanted to learn to be a doctor. Her father told her she could not. He told her that only boys could be doctors and that she would have to be a teacher or a nurse. But Maria did not want to be a teacher! She did not think it was fair that only boys could be doctors and decided she was going to study to be a doctor. Often Maria had to study alone because she could not work with the boys, but she did not mind. Maria studied very hard and became the first woman doctor in Italy!

Her fist job after getting her degree was to work in a hospital with sick children. When she got there she noticed that the rooms looked very sad. They did not have any pictures on the walls or p

Maria Montessori noticed the children helping each other to learn. She noticed they were kind to each other. She thought that helping children to be respectful to each other, to nature, and to all the things in the classroom was an import part of her school. During this time many of the adults were fighting and there was a big war going on. Montessori thought that if the children learned how to be peaceful then they could show the adults how to solve problems with kind words too.

At Winfield the children practice being peaceful every day. They help their friends with works and unpacking their lunches. They hold doors open for each other and help to tie shoes and zip coats. The children at Winfield share the swings and balls on the playground and invite friends to join their games. If Maria Montessori were to visit Winfield she would be very happy to see all the peacemakers still doing her most important work.